Certain Pilots are eligible for a special payment to cover all income taxes that result from expense reimbursements.  To qualify for this large rebate and significantly lower your income tax bill for 2013, you need to meet the following requirements:

You might be wondering if this is a joke or is there really a provision that requires the membership to pay the net income tax liability for ALPA National Officers?  Incredibly, this is absolutely true!  At the October 2012 ALPA Board of Directors meeting, the BOD approved this new "tax rebate" payment.  ALPA National Officers are paid extravagant allowances for a variety of things such as housing.  While reporting to the members that these are "expenses", in reality, the IRS views paying for your mortgage as "income" and levies income taxes as appropriate.  Of course, this Gross Up Payment is RETROACTIVE to January 1st, 2011.  ALPA National officers have now been authorized an annual payment to cover their tax burden.  Read the resolution below:

During the month of October 2012, ALPA member elected Representatives participated in what is arguably the most important Board of Directors meeting in ALPA history.  Faced with multiple lawsuits, declining membership and the potential exit of Delta and United, the decisions made at this meeting would be critical.

At the time of this meeting, the most recent MCF Status Report indicated that the MCF had fallen to less than $35 Million in uncommitted funds and to a total funds of only $47 Million.  Constitutionally, ALPA is directed to maintain the MCF at a level between $70 Million and $150 Million.  Seeing that the MCF was well below the targeted amount, what action did your elected representatives take?

2.  They RAISED the dues on any airline that had only a 401K for retirement by deleting the exemption that previously calculated the dues amount after 401K contributions had been met.

3.  They gave the National Officers a RAISE by authorizing an Income Tax Gross Up Payment to cover the net tax liability caused by all reported expenses. Incredibly, our dues dollars are being used to alleviate the tax burden resulting from the exorbitant expenses (housing allowance, e.g.) provided to the officers.

4. Most importantly, they changed the Administrative Manual to allow any excess funds, after the budget needs are met, to go to the MCF or Kitty Hawk Insurance Company.  This means that the ALPA officer salaries, retirements and required Presidential Oil Painting take priority over properly funding the MCF!  With the MCF sitting at less than HALF of what it should be, ALPA chose to fund it with leftovers.  Having said that, in the event that items like dues from Profit Sharing create a surplus in any year, ALPA can push all the excess offshore to Kitty Hawk where there is no accountability to the membership.  This is clearly important considering the TWA and AirTran lawsuit outcomes are bearing down on ALPA finances in 2013.

View the excess funding resolution below:

It has been reported that due to the negative impact the Great Recession has had on economies all over the world, this Christmas, Santa Claus only had two “Ho’s”, not three as is the custom.

Additionally, it was reported, that if the recession deepens further or the recovery continues at its current slow rate, in 2013 Santa might have to do with only one. 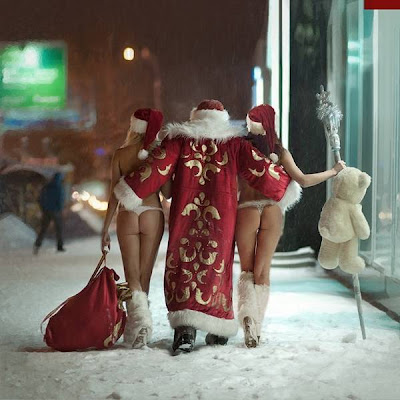 Either way… one Ho is better than no Ho.

OMG... Some are bad, but some are really funny.

I apologize if this offends anyone...
Definitely not Politically correct.
And... some of these jokes I would never repeat.

Please plug your ears on some and laugh at the others.

What Is the Meaning Of Pressurization?

I try not to talk politics or religion in the cockpit. But sometimes there are things can't be passed up... especially if there is a plane involved. Seriously I can't make this stuff up.


On Monday, Mitt Romney offered a remedy to the problem that caused his wife’s airplane to land prematurely last week: Allow passengers to roll down the airplane windows.

Ann Romney’s plane was grounded Friday after the main cabin filled with smoke. The small electrical fire caused no injuries, but apparently did cause the Presidential candidate to forget the dangers of altitude.

“When you have a fire in an aircraft, there’s no place to go, exactly,” he told the LA Times. “And you can’t find any oxygen from outside the aircraft to get in the aircraft, because the windows don’t open. I don’t know why they don’t do that. It’s a real problem.”

Maybe we should explain to Romney about the lack of oxygen at altitude, and the concept of pressurization. Or we could send him out on a private jet and let him open the door for the big picture concept. They say it's worth a thousand words.
Posted by Darby at 9:15 PM 4 comments:

How to Deal with Passgengers...

An award should go to the United Airlines gate agent in  Denver for being smart and funny, while making her point, when confronted with  a passenger who probably deserved to fly as cargo. For all of you out there  who have had to deal with an irate customer, this one is for you!

A  crowded United Airlines flight was canceled. A single agent was re-booking a  long line of inconvenienced travelers.

Suddenly, an angry passenger  pushed his way to the desk. He slapped his ticket on the counter and said, "I  HAVE to be on this flight and it has to be FIRST CLASS."

The agent  replied, "I'm sorry, sir. I'll be happy to try to help you, but I've got to  help these folks first; and then I'm sure we'll be able to work something  out."

The passenger was unimpressed. He asked loudly, so that the  passengers behind him could hear, “DO YOU HAVE ANY IDEA WHO I  AM?"

Without hesitating, the agent smiled and grabbed her public  address microphone.  "May I have your attention, please?", she began, her  voice heard clearly throughout the terminal.

"We have a passenger here  at Gate 14 WHO DOES NOT KNOW WHO HE IS.  If anyone can help him find his  identity, please come to Gate 14".

With the folks behind him in line  laughing hysterically, the man glared at the United agent, gritted his teeth,  and said,  "F***  you".
Without flinching, she smiled and  said,  "I'm sorry sir, you'll have to get in line for that,  too."
Posted by Darby at 10:58 PM 2 comments:

Sexual Advisor to the Captain

Last week on a layover I had someone ask me in the bar, what I did.
I said, "I'm a pilot."

"What? You're the captain?"

"No, the first officer."

"But I thought you said you weren't the captain."

"I know what a captain does, but what does a first officer do?"

Oh God. Seriously?  I'd been drinking a little bit so I told him, "The first officer is the sexual adviser to the Captain." 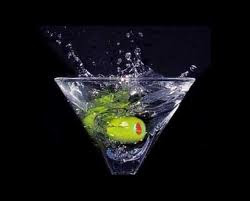 He said, "What?" Choking on his drink, and spraying me.

I smiled sweetly, and wiped my face with the back of my hand. "Yeah," I said. "The Captain always says, 'If I want any fucking advice from you, I'll ask for it!"

First food. Then luggage. What next? Another Airline Profit Center is in the wind... 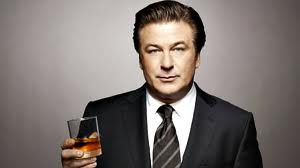 From reliable sources... Airbus and Boeing are conducting feasibility studies on building the next generation airplanes with pay lavatories. What once was operated with coins, the new doors will be designed with the utilization of credit card machines. 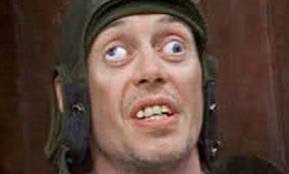 The current challenge appears to be with Federal Aviation Administration certification process and the price. While some inspectors are under the assumption that urgency and whether or not the person needs to take a dump, or just pee, should be addressed. Regardless, we can assure you that we will never see the 10 cent rates as we did in the old days. Anticipate $1.99 for entry. What you do inside is your option. 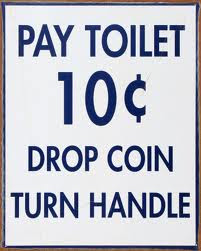 Piggy-backing is prohibited and will be monitored.
If you intend on having friend join you,
your card will be charged double. 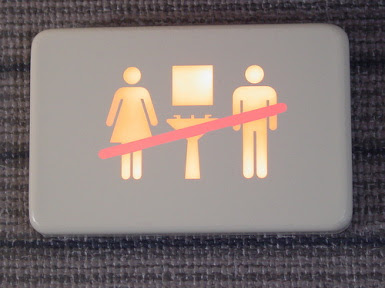 For emergency access, or to see what the couple ahead of you are doing in there together, you can unlock the lavatory by lifting the metal thingy and sliding the bar beneath. 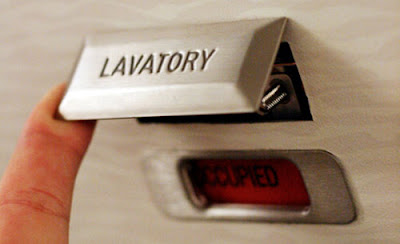 Pay Toilets... just another way the airlines are here to serve you.
Posted by Darby at 6:57 PM 2 comments: